We use cookies to make your experience better. To comply with the new e-Privacy directive, we need to ask for your consent to set the cookies. Polityka prywatności Pneumatig. 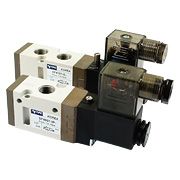 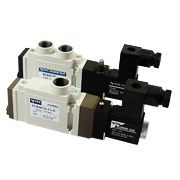 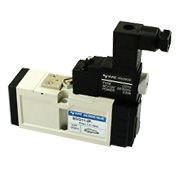 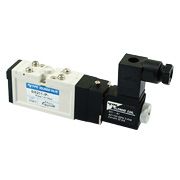 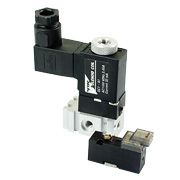 A solenoid valve is a valve designed to shut off or control the flow of liquid or gaseous media, in which the control element is an electromagnetic coil, and if you are looking for a compressed air controlled valve, pneumatic valves are described in more detail here .

The change of the electromagnetic signal that controls the valve causes the position of the flow blocking element to change. As electric current flows, a magnetic field is generated that draws the core or moving anchor to the stop.

When the current flow ceases, the magnetic field disappears and the obturator returns to its starting position by the action of the spring.

The most important components of the solenoid valve include:

Due to the individual components and the use of electromagnetic valves, the following basic parameters are distinguished:

When choosing a pneumatic solenoid, two parameters should be taken into account: - working, which includes:

The structure depends on the type of medium that is to be handled, if they are non-aggressive media, usually valves with a brass body are used, while in the case of aggressive ones, the valves should be made of stainless steel. When selecting the valve size, care should be taken that it is neither too small nor too large.

Using a valve that is too small can contribute to: inability to achieve the desired flow rate, conversion of liquid into gas at the valve outlet, reduction of outlet pressure and undesirable pressure loss in the system. On the other hand, a valve that is too large may affect: variable flow through the valve or incorrect flow control, shortening of the service life of some valves due to vibrations of internal parts caused by lack of flow, and created to generate the required internal differential pressure.

Most of the solenoid valves are designed to operate with clean media, it is recommended to install the solenoid valves in a vertical position to prevent the accumulation of debris near the magnetic core. Where contamination is highly likely to occur, install a filter or strainer upstream of the valve inlet and frequently perform routine inspection.

In addition to contamination, the lack of proper voltage can also disrupt the correct operation of the valve. Typically, solenoid valves are designed to operate at nominal voltage, if the power supply is too weak, it may lead to faulty closing and opening of the valve, excessive noise, vibration and shorten the life of the valve.

Depending on the mode of operation, there are two types of valves. These are direct acting valves and servo-assisted valves. In direct-acting valves, the seat seal is located directly on the magnetic core. When changing the position of the core, the valve opens or closes. These valves are used for low flow or pressure values.

Their main feature is the fast response time, usually measured in milliseconds. On the other hand, servo-assisted valves use the pressure differential across the valve to force the valve to open and hold it in that position. The pressure force on the obturator increases with larger valve seat diameters.

To overcome it, a correspondingly greater magnetic force is needed. These types of valves are used with a large range of diameters, and their characteristic feature is a wide range of working pressures. Small cross-sections of the control channels make it sensitive to contamination, and the switching time is longer than in the case of using direct-acting valves. Depending on the number of possible flow paths, pneumatic solenoid valves are divided into 2-way, 3-way and multi-way.

However, based on the purpose of the valves, various configurations are distinguished based on: the number of possible connections, the number of rest positions, the rest position, and the type of flow control element. Two-way direct-acting electromagnetic valves have an inlet and outlet connection in the valve body, the normally closed version is characterized by the fact that when voltage is applied to the valve coil, the valve opens and the medium flows. The normally open version relies on the free flow of the medium until voltage is applied to the coil, then the valve is closed.

In both of these cases, the closing and opening is caused by the electromagnetic field generated by the solenoid valve coil. The three-way direct-acting pneumatic solenoid valve has an inlet and outlet connection in the solenoid valve body and a vent, which is located above the spindle. In the normally closed version, the closing of the valve prevents the medium from flowing through. The vent and the inlet port are interconnected.

The most popular pneumatic solenoid valves on the market are manufactured by YPC, depending on the function or application, they are divided into individual series: